Freeing a Family from CBP Custody: A Lawyer’s Perspective

A few weeks ago, I posted a story written by one of our clients, a Registered Nurse from the Philippines employed by a hospital in the U.S., who was stopped and held by CBP officers as she and her family tried to drive north from their home in El Centro, California near the U.S.-Mexican border to Palm Springs t 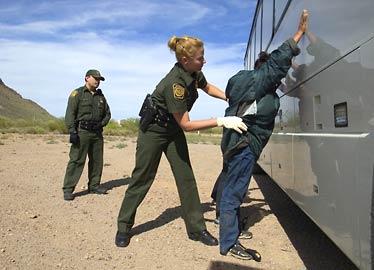 o celebrate her husband’s birthday. The entire family had pending applications for adjustment of status, but in a bizarre twist of fate, they were held in CBP custody all day and threatened with criminal charges, incarceration, and deportation.

Here is the story from my point of view:

Having worked for the INS (1976-82), I always assume that government officers are trying to do their jobs to the best of their ability. However, they have tremendous power over the lives of foreign-born persons residing in the U.S., and this power is not always exercised judiciously.

When I arrived at my office in the morning, one of our legal assistants informed me that a client had left a message for me to call her. It was an emergency.

I immediately returned her call, and learned that she and her family had been stopped at an interior checkpoint on the highway heading north from El Centro to Palm Springs. They were all being held in their own car. The RN and her husband had shown the officers their EAD work permits and their children’s passports. The CBP officers told them that it was illegal for them to apply for adjustment of status since they had initially arrived in the U.S. as visitors. Further, since the I-94s in their children’s passports had expired, they could be charged with transporting illegal aliens, a criminal offense. At the very least, they were going to be taken into custody and transported to an immigration detention facility to undergo removal proceedings.

In the background, I could hear the loud barking of dogs, and a female CBP officer demanding that my client stop using her cell phone in a “secure area”.

Not knowing exactly where my clients were being held in CBP custody, I called a CBP attorney, explained the situation to him, and requested that he intervene to get my clients released. I was shocked when he replied to my request by stating the following: “So your clients have applied for adjustment of status, but their applications are still pending. Therefore, they need to return to their countries and wait for their approvals. They have no right to remain in the U.S.”

I figured that I was talking to an attorney who perhaps understood the customs side of the agency, but was completely clueless as to immigration laws and procedures. I patiently explained that persons with pending applications for adjustment of status had the right to remain in the U.S. Why else would USCIS routinely issue such persons work and travel permits? I faxed the I-485 filing receipts to the CBP attorney, and asked him to verify what I had told him with the USCIS. He agreed to do so and to call me back within an hour. However, I never heard back from him.

Fast forward to 5pm. After several more phone calls to my clients, I determined where they were being detained. I called the phone number listed on the CBP website, and got a supervisor on the phone. He was very polite and we discussed the situation in a civil manner.  He informed me that my clients’ EADs had expired, but that they had continued to work in the U.S.  He stated that he had no choice but to issue NTAs. I countered that if a person doesn’t apply for a new EAD a few months in advance, it is common for the old EAD to expire before the new EAD is issued.  However, in those situations, if the person is adjusting status through employment, Section 245(k) allows the person to adjust status in the U.S. despite a short period of unauthorized status. Taking such persons into custody and issuing NTAs was a waste of governmental resources since the Immigration Judge would probably terminate proceedings to allow the person to adjust status before the USCIS. However, the supervisor, ever polite, said, “Mr. Shusterman, you may be correct, but we have to do what we have to do, and we will let the Immigration Judge decide what to do with your clients.”

I thanked him for speaking with me, and hung up the phone, feeling somewhat frustrated. I thumbed through my client’s file, and suddenly noticed that we had processed the EAD extensions for her and her husband (We usually advise our clients to do this on their own in order to save attorney’s fees.), and that they had been issued new EADs valid until the summer of 2010.

I immediately called the supervisor back, and offered to fax the EAD approvals to him.  He sounded somewhat shocked when I told him the news. He said that he would look into the situation immediately, and check my materials against what appeared in the government’s computers. This would take at least 45 minutes, and if everything checked out, my clients would be released.

I told him that I was leaving work, and asked if I could call him in 45 minutes from my house. I also provided him with my home phone number. He agreed.

As soon as I returned home, I called the supervisor. However, another CBP officer took my call. He informed me that the needed checks were still being performed. He called me “Carl” rather than “Mr. Shusterman”, which I took as a good sign. Then he told me that all the officers at his office were impressed with my work, and that “if he ever needed an attorney, he would call me.”  I was stunned, and I thanked him. He said to call back around 7 pm since my clients should be released from CBP custody by then.

I ate dinner with my wife and told her the story. She was born in the Philippines, and is a former INS and Customs officer. She told me that most Customs officers that she worked with knew little or nothing about immigration laws and procedures.

At 7 pm, I called the CBP but could not get through. I called my client on her cell phone, and she informed me that she and her family had been released from CBP custody. It had been a horrendous day for her and her family, and she agreed to write her story for me to share with readers of my blog and newsletter.

It had been an exhausting day for me as well. I was glad it had a happy ending, but I remain concerned about the next family who might be placed in a similar situation.