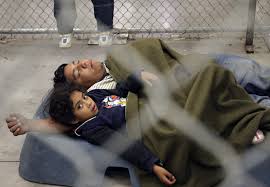 When it comes to immigration detention, it is important to know your rights!

Tens of thousands of would-be immigrants are imprisoned in America’s Gulag all across the U.S. Some cannot make bail while others are being held without bail.

Many of these prisoners of our broken immigration system have committed no crime, but are being charged with being present in the U.S. unlawfully or having violated their temporary or permanent resident status. Often, their spouses and children are forced to live with relatives or to apply for welfare in order to support themselves while their loved ones remain locked up, waiting for their hearings before overworked Immigration Judges or for their appeals to be decided by either the Board of Immigration Appeals or the Federal Courts.

The Berks County Residential Center and Yuba County Jail will close at the start of 2023.

But, even though persons in immigration detention have less legal protections than do individuals accused of a crime (whatever their legal status), they still have some rights. We hope that this page helps you locate a family member who is in immigration detention and assists you in helping them assert their rights. We urge persons in state and local custody to take advantage of the ICE Detainee Hotline at (855) 448-6903

Here is what ICE has to say about Immigration Detention:

Non-U.S. citizens who are apprehended and determined to need custodial supervision are placed in detention facilities. Those who are released from secure custody constitute ERO’s “nondetained” docket. Every case, whether “detained” or “non-detained,” remains part of ERO’s caseload and is actively managed until it is formally closed. ERO processes and monitors detained and non-detained cases as they move through immigration court proceedings to conclusion. At that point, ERO executes the judge’s order.

The NDS were originally issued in September 2000 to facilitate consistent conditions of confinement, access to legal representation and safe and secure operations across the detention system. The standards established consistency of program operations and management expectations, accountability for compliance and a culture of professionalism.

– The Court held that California Assembly Bill 32 (AB 32), which aimed to phase out all private detention facilities within the state, intruded into the realm of the federal government’s exclusive powers to detain undocumented and other removable immigrants and violated the intergovernmental immunity doctrine.