She Died but Her Dream Lives On

Tam Ngoc Tran died on May 16th in a car accident. She was a doctoral student in American Civilization at Brown University.

I had a brief encounter with this intelligent and lovely young lady in 2006 when I visited UCLA to assist foreign-born students in finding solutions to their immigration problems. Each of the students told me his or her story. Most shared the following themes: They were born in other countries and brought to the U.S. as toddlers. They grew up believing that they were born in the U.S. and that if they studied hard and got good grades, they could be anything they wanted. They were honor students in high school and were in the process of applying for financial aid to attend UCLA. That’s when they got the news that changed their lives forever.

Their parents told them that they were “illegal aliens” in the U.S.

How could that be? They only spoke English. They were going to be doctors and lawyers and scientists. Now what was the use of studying? How could they even get jobs when they graduated from college? Return to the countries of their birth? They didn’t even speak the language.

Tam’s story was the most unusual.

Her father was an ardent anti-Communist in Vietnam. After the Communist takeover, her family became “boat people.” They were rescued at sea by a German ship and taken to Germany, where Tam was born. Had the ship been from the U.S., things would have turned out much differently for Tam and her family.

When Tam was six years old, her family came to the U.S. and applied for asylum. This was an unwise move on her father’s part, since Germany had already taken them in. Their applications were denied. Her father tried to move the family back to Germany, but Germany said that by moving to the U.S., they were no longer willing to let the family return. Finally, an immigration judge granted them “withholding of deportation,” meaning that they could not be deported to Vietnam, but would not be able to apply for green cards in the U.S. They would remain in permanent “legal limbo” in the U.S. This is not as unusual as it sounds. Over 300,000 people who have been ordered deported are still in the U.S. because there is no country to deport them to. Every year, Tam’s parents went to the INS and renewed their work permits.

Tam was a star student, and when I met her in 2006, she was working to save money to pay for graduate school. She was also an active member of IDEAS at UCLA. This group fights for the interests of undocumented students and for passage of the DREAM Act.

In 2007, Senator Richard Durbin (D-IL) introduced the bipartisan DREAM Act in the Senate. The DREAM Act would grant certain undocumented college students permanent residence in the U.S., but only if they had entered the U.S. before age 16 and had graduated from a high school in the U.S. This legislation, which has yet to make it through Congress, would have resolved Tam’s dilemma.

Senator Durbin featured Tam and two other students at a press conference when he introudced the DREAM Act. Congressman Tom Tancredo (R-CO), active among the anti-immigrant forces in Congress, called on ICE to arrest all three students at the press conference and deport them. Tancredo stated: “Just because these illegal aliens are being used for political gain doesn’t mean they get immunity from the law.”

Senator Durbin replied by saying that “what does it say about America that a member of Congress would call on these young people to be arrested?…They should be given a chance.”

ICE wisely decided not to get involved. If they had, Tam could simply have shown them her government-issued work permit.

She Died but Her Dream Lives On – Pass the DREAM Act

However, what happened next I did not learn until after I had read that Tam had died in the car accident.

In 2007, Tam testified before Chairwoman Zoe Lofgren (D-CA) and the House Immigration Subcommittee. Tam’s photo appeared on the front page of USA Today.

Three days later, ICE agents arrested and detained her family. Only after Congresswoman Lofgren intervened and accused ICE of “witness intimidation” were her parents released from custody.

The anti-immigrant crowd called for Tam to go back to “her country.” Which country is that? Germany? Vietnam?

Here is what Tam said to members of the Immigration Subcommittee:

“I hate filling out forms, especially the ones that limit me to checking off boxes for categories I don’t even identify with. Place of birth?  Germany. But I’m not German. Ethnicity? I’m Vietnamese, but I’ve never been to Vietnam. However, these forms never ask me where I was raised or educated. I was born in Germany, my parents are Vietnamese, but I have been American-raised and -educated for the past 18 years….

The truth is, I am culturally an American, and more specifically, I consider myself a Southern Californian. I grew up watching Speed Racer and Mighty Mouse every Saturday morning. But as of right now, my national identity is not American, and even though I can’t be removed from American soil, I cannot become an American unless legislation changes….

Graduation for many of my friends isn’t a rite of passage to becoming a responsible adult. Rather, it is the last phase in which they can feel a sense of belonging as an American….

Without the DREAM Act, I have no prospect of overcoming my state of immigration limbo; I’ll forever be a perpetual foreigner in a country where I’ve always considered myself an American.” 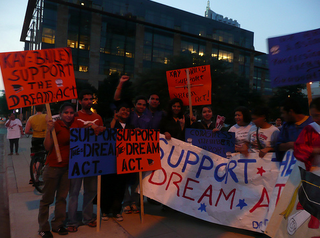 Like Dr. Martin Luther King, Tam reached the Mountaintop, but not the Promised Land.

Let’s urge Congress to pass the DREAM Act this year so students without papers can contribute to society after they graduate and not be consigned to perpetual immigration limbo.