Ever wonder how many people get green cards in the U.S. in a year? 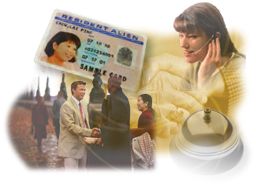 Hardly! Only 15% of last year’s immigrants were born in Mexico. The other top countries of birth were China, the Philippines, India, and the Dominican Republic, each of which accounted for 4-6% of the new immigrants.

The median age of immigrants is lower (31 years) than that of the native-born population (35 years).

And do any of the statistics tell us why the line for employment-based (EB) immigrants is becoming so backlogged? Yes, the annual quota for EB immigrants deceased from 162,704 in 2008 to 140,000 in 2009.Now, that’s something that Congress may want to look into.

Oh, I know what you are asking yourself: where did Shusterman get all of these numbers, probably from the American Immigration Lawyers’ Association, right?

They came from a report issued this spring by the United States Department of Homeland Security!