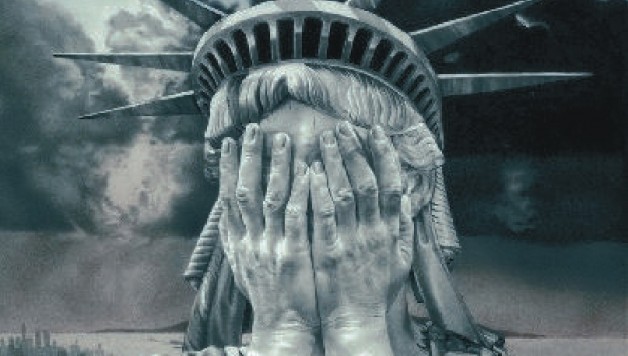 Given all the recent immigrant-bashing by politicians hungry for votes, I could not stop myself from reading a new book entitled “Adios America” by Ann Coulter in which she sets out to convince us that immigration is destroying our country.

A more apt title for her book would be “Keep America White!” To her, immigration is simply a vehicle for polluting our country with murderers, rapists, terrorists and welfare cheats who, in her telling, all seem to be either Hispanic, Muslim or other primitive peoples from third-world countries.

Why would the greatest country in the world do this to itself?

What Ann wants us to believe is that this is the result of the Immigration and Nationality Act of 1965, a crazy left-wing bill sponsored by Senator Ted Kennedy to flood the US with uncivilized people from the third world. The more immigrants, the more votes for the Democrats. What Ann wants is a complete moratorium on immigration before the US becomes a “third-world hellhole” like California.

Doubtlessly, Ann’s logic and her 75+ pages of footnotes from anti-immigrant sources resonate with a lot of voters on the right. Yet, while Ann is certainly entitled to her opinions no matter how bigoted, she is not entitled to create her own facts to justify her extreme views.

Ann Coulter – Look at the Facts!

Let’s start with the Members of Congress who voted for the 1965 Act. The Democrats voted for it by a 3 to 1 margin while the Republicans supported it by a 10 to 1 margin. Very odd if this was indeed a bill to secure a permanent Democratic majority in Congress.

Are most immigrants really criminals and welfare cheats? Or is Ann simply highlighting the most horrible examples of people who commit crimes and go on welfare in an effort to smear all immigrants?

A huge amount of immigrants over the past couple of generations have settled in major cities like Los Angeles, New York and Chicago. Yet, the crime rate has fallen dramatically in each of these cities. Given Ann’s “facts”, how can that be?

Let’s look at California, the state that Ann is afraid the rest of the country will devolve into. Where would Silicon Valley be without the brains and energy of tens of thousands of foreign-born computer programmers and immigrant entrepreneurs like Steve Jobs of Apple (son of a Syrian immigrant), Sergei Brin of Google, Andy Grove of Intel and Jerry Yang of Yahoo?

California has some of the best public and private universities in the world and exports its agricultural produce and wines around the world. Its federal taxes subsidize people in many poor states in the South and Midwest. Not bad for a 3rd world hellhole.

And let’s not forget the foreign-born scientists in the biotech industry, cancer researchers, the thousands of physicians and nurses who staff our hospitals and teachers in inner city schools.

Even those immigrants who are not highly-educated often work long hours for low pay. They pick our crops, wash our cars, mow our lawns and care for our children and elderly parents. They are working for a better life for their children, for the American Dream.

Should There be a Moratoriam on US Immigration?

What if Ann Coulter got her way and we imposed a moratorium on immigration?

This would be a disaster of untold proportions. Hundreds of thousands of US citizens would no longer be allowed to live together with their foreign-born spouses and children.

Our public universities which depend on thousands of foreign-born students who pay out-of-state tuition would have to drastically raise their already expensive tuition rates for US students.

And what about the 30 million tourists who spend billions of dollars each year vacationing in the US? Goodbye to millions of jobs for Americans who work in hotels, restaurants and airlines.

We have come a long way since the 1950s when blacks in the South could not vote or even sit at lunch counters, when most Asians were “racially-ineligible” for US citizenship and when Mexican-Americans could be rounded up and deported without even the right to a hearing before a Judge.

Contrary to what Ann Coulter believes, one of the things that makes us a great country is that we are a Nation of Immigrants. Ideally, we strive to judge people on their individual merits, not on the basis of their race, religion or nationality.

And if we each look at our ancestors, we will realize that we are all immigrants.