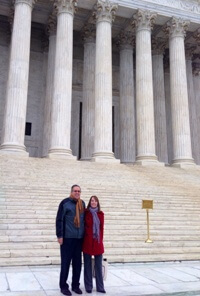 On December 10, 2013, the Supreme Court of the United States heard oral arguments concerning who benefits from the “Retention of Priority Date” clause of the Child Status Protection Act (CSPA).

Hopefully, in the next few months, this matter will be settled once and for all, and sons and daughters of parents who immigrated years ago will, at last, be permitted to rejoin their families in the U.S.

The government, having lost in the Court of Appeals, first addressed the Court:

However, various Justices let the government know that they were not persuaded:

Justice Ginsburg: “What about all the time this one child has been waiting? It gets no credit for that?”

Justice Sotomayor: “It would have been much, much simpler to say this is limited to F2A beneficiaries than to write it the way they did and say this is to everybody who ages out.”

Justice Kagan: “…it seems as though you shouldn’t be entitled to Chevron deference on that question, given what Wang said about it.”

The government attempted to counter each of the above statements. It argued that the Court recognized that “deference is particularly appropriate in immigration contexts.”

The government expressed concern about delays to persons waiting in the F2B line, but when questioned by Justice Breyer, it revealed that it was impossible to calculate how much of a delay that these persons would experience if the respondent’s prevailed in this lawsuit.

The issue in this case is whether the Court must give “Chevron deference” to an administrative decision interpreting a law, in this case, the Board of Immigration Appeals (BIA) decision in Matter of Wang. Here, the Court uses the following two-step test:

Step 1 – “First, always, is the question whether Congress has spoken directly to the precise question at issue. If the intent of Congress is clear, that is the end of the matter; for the court as well as the agency must give effect to the unambiguously expressed intent of Congress.”

When it was his turn to address the Court, Mark Fleming, the attorney arguing the matter on behalf of the immigrant families, stated:

“The government began at Step 2 of Chevron, but I would submit that this case can and should be resolved at Step 1. The government is asking this Court to read the statute in a highly disfavored way such that it is not harmonious but at war with itself, and nothing in the language requires that…”

Justices Kennedy and Scalia questioned how “automatic conversion” would operate. Justice Scalia was concerned that respondent’s interpretation of the clause would permit an adult son or daughter to immigrate to the U.S. over his or her parent’s objections.

Mr. Fleming explained that in the highly unlikely event that the parent did not want his son or daughter to join him in the U.S., he could refuse to sign an affidavit of support and they would not be able to immigrate.

Justice Kagan: “Based on — another understanding of Chevron is sometimes Congress writes confusing statutes that point in two different directions at once, and then there’s a choice. Does the Court make the best of it or does the agency make the best of it? And the agency knows a lot about the subject matter, and especially this agency, and so irrespective of whether Congress meant to delegate something in some very self-conscious way, this is a confusing statute, it’s a kind of the muddle. The agency gets to do it.”

Mr. Fleming responded that it was clear that (h)(3) applies to all derivative beneficiaries, and that it was very possible for the agency to interpret the words “retention” and “automatic conversion” in a matter which would implement the intent of Congress. Furthermore, “retention” and “automatic conversion” are deemed separate and distinct benefits by the statute. Even if the agency decided that automatic conversion was not possible in selected cases, the son or daughter would still be able to “retain” the priority date of the original F3 or F4 petition.

Justice Scalia: “Well, this is all upside down. I thought it’s the agency that we deferred to. If it can be read in the way the agency wants, we affirm the agency’s position.”

“The Respondents were trying to put far too heavy a burden on the government in the Chevron deference case. So long as the agency has arrived at a reasonable reading of this very complicated statute, the agency is entitled to deference here.”

“The government also expresses its concern with the possibility that a derivative beneficiary could “have a priority date somehow in their pocket that they could walk around with and use 20 years later when somebody filed a different petition on their behalf, an employment petition…”

While it is impossible to predict the final outcome of a case based solely on the oral arguments, I remain cautiously optimistic that the Supreme Court will ultimately agree with both the 5th and the 9th Circuit Courts of Appeals that the statute is unambiguous and that there is no need to defer to the flawed BIA decision in Matter of Wang. A decision may be forthcoming as early as February or March.

As recognized by many of the Justices, the government is arguing for a very restrictive reading of CSPA. Yes, the DOJ instead portrays itself as the defender of those in the F2B line and categorizes our clients as “line-jumpers”.

What the DOJ conveniently overlooks is that CSPA created (h)(1) to allow all qualifying derivative beneficiaries who would, in the past, have “aged-out” and lost their place in line to immigrate together with their parents in a particular preference category. Under the government’s reasoning, why are they are not “line-jumpers”? Congress simply made a policy decision to give sons and daughters who have waited for years in line for permanent residence together with their parents credit for their wait, and not send them to the back of the line. It is clear that (h)(3) extends this same credit to unmarried sons and daughters of permanent residents.

Could it be that the DOJ simply disagrees with these policy decisions?

If so, they should lobby Congress, not the Supreme Court, to change the law.