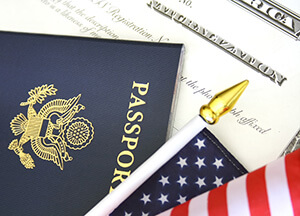 Usually, it takes years to become a citizen of the United States. A person born in a foreign country must first enter the U.S. as a tourist or a student, change to a working visa, obtain a green card through sponsorship by a family member or an employer, and wait five years to apply for citizenship. Now, under the terms of a new law, a few thousand lucky persons will be able to reclaim lost US citizenship immediately.

On October 25, 1994, President Clinton signed into law the Immigration and Nationality Technical Corrections Act of 1994 (INTCA, Public Law No. 103-416). The law which was passed with little fanfare contains the most significant changes to the laws concerning the acquisition of citizenship in 60 years.

The immigration law has always allowed certain children born abroad to acquire citizenship at birth if one or both of the parents were US citizens at the time of the child’s birth. The laws governing the acquisition of citizenship at birth have been modified on numerous occasions.

Before May 24, 1934, only citizen fathers of child born abroad could transmit citizenship to their offspring. After that date, the law was amended to allow citizen mothers and fathers to transmit U.S. citizenship to their children. However, this amendment was not retroactive. A child born abroad on May 23, 1934 whose mother was a U.S. citizen and whose father was an alien, did not become a U.S. citizen at birth like his counterpart who was lucky enough to be born a day later.

Also, between 1934 and 1978, the law imposed a “retention” requirement upon children born abroad who had one parent who was a U.S. citizen and one parent who was an alien. Not only was the U.S. citizen parent required to reside in the U.S. for a fixed period of time before the child’s birth, but the child was required to be present in the U.S. for a specific period of time during his youth. If a child failed to meet this retention requirement, he automatically lost his U.S. citizenship.

A person born abroad before May 24, 1934 of a citizen mother and an alien father sued the State Department stating that the pre-1934 law denying him citizenship deprived him of the equal protection of the law. Why should he be treated any differently than a person with a citizen father and an alien mother? In 1993, a federal appeals court ruled in his favor.

Section 101 of INTCA provides that children born abroad prior to May 24, 1934 of citizen mothers (who had resided in the U.S. prior to the child’s birth) and alien fathers are citizens of the U.S. Furthermore, the law treats them as citizens as of the date of their birth. Whether they ever apply for U.S. passports or Certificates of Citizenships is immaterial. However, the law specifically makes persons who participated in Nazi persecutions or who have engaged in genocide ineligible for this benefit.

Section 103 of INTCA allows persons who lost their U.S. citizenship between 1934 and 1978 due to their failure to satisfy the retention requirement the opportunity to regain their citizenship by taking an oath of allegiance to the U.S. Unlike section 101 which became effective on October 25, 1994, section 103’s effective date is March 1, 1995.

Thousands of persons born abroad and their spouses and children are expected to benefit from these amendments. Many of the persons who will benefit were born in countries bordering the U.S. (i.e., Canada and Mexico) or in countries which were previously territories of the U.S. such as the Philippines. However, the law contains no restrictions regarding the country of birth of the beneficiaries.

For those not familiar with the laws governing the acquisition of citizenship, a few examples of who may be affected by the new law may be helpful:

Mr. Suerte once tried to obtain a U.S. passport from the U.S. Embassy in Manila. However, his application was rejected on the ground that U.S. citizen mothers could not transmit citizenship to their children born abroad before 1934.

Under INTCA, Mr. Suerte may be issued a U.S. passport since he is considered to be a U.S. citizen at birth. He may apply for a green card for his wife as an “immediate relative” of a U.S. citizen.

Now, she can regain her U.S. citizenship by taking an oath of allegiance to the U.S. Once she is in possession of a U.S. passport, she may immediately apply for permanent residence for her husband and two children.

3. Mr. Patel is a native and citizen of India. His maternal grandmother was born in the U.S. His mother was born in India in 1936 and has never come to the U.S. Mr. Patel was born in India in 1967 and is a graduate student at USC. He desires to live permanently in the U.S. He has heard that the best way of doing so is to obtain practical training after graduation, to change his status to H-1B and then to have his employer sponsor him for permanent residence.

Anyone who has a U.S. citizen parent, grandparent or in-law, whether living or deceased, should obtain a legal opinion as to the effect of INTCA on their immigration status if they wish to live in the U.S. Instead of a lengthy wait for a green card, they may be immediately eligible for U.S. citizenship.