Video – Orphan Gets A Green Card 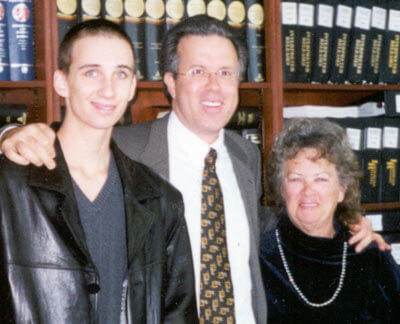 In this video, Immigration Attorney Carl Shusterman (former INS Trial Attorney 1976-82) explains how a 16-year-old orphan from Canada was allowed to obtain a green card and join his family in the United States.

Guy Taylor, a 16-year-old boy living in Canada, became an orphan when his mother died of a drug overdose. His grandmother, a US citizen living in Long Beach, California, immediately traveled to Canada and became the legal guardian of her grandson.

At the airport, an immigration inspector, asked the grandmother for Guy’s travel papers. After she provided him with a certified copy of the guardianship papers, he replied, “Lady, this ain’t worth the paper it’s written on.” The grandmother, with her grandson in tow and her daughter’s coffin being loaded on the plane, asked to speak with a supervisor. The supervisor paroled Guy into the U.S.

After arriving in the U.S., Guy and his grandmother visited Attorney Carl Shusterman. We held a press conference to highlight Guy’s precarious situation. He had no living relatives in Canada. All of his relatives – grandparents, aunts, uncles and cousins – lived in the U.S.

The INS granted Guy a parole and a work permit.

We held a press conference in our office and Guy’s story was featured on television, radio and in a number of newspapers including the Los Angeles Times.

After reading about Guy’s plight in the newspaper, Senator Dianne Feinstein (D-CA) introduced a private bill in the US Senate on Guy’s behalf to make him a lawful permanent resident.

In December 2000, President Clinton signed the bill into law. As soon as he received his green card, Guy joined the US Army.