Members of Congress Meet the Campbells 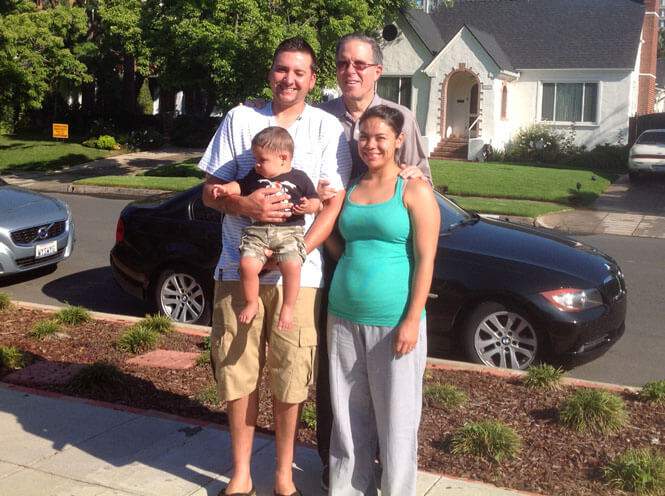 Ryan and Jio Campbell, Their Son and Attorney Carl Shusterman

We all want an immigration system that is just and humane, don’t we?

One that keeps families together and rewards talented individuals.  One that excludes dangerous criminals and other undesirables.

If you are a Member of Congress getting ready to vote on important immigration legislation, allow me to introduce you to the Campbell family and tell you about their immigration nightmare.

Ryan and Jiovanna Campbell live in a small community in the Central Valley of California.  They were high school sweethearts who married and are the proud parents of a one-year-old son.  Ryan works two jobs, and Jiovanna (Since we are all friends now, let’s call her “Jio”.) is pregnant with their second child, a daughter.  They are law-abiding, taxpaying, patriotic citizens.

Er, that is, Ryan and their son are both US citizens while Jio is a lawful permanent resident who was sponsored by Ryan.  She got her green card after being forced to live in Mexico, apart from her husband, for 16 months.

Let me tell you a little about Jio’s history.  Try to put yourself in her place. She was born in Mexico, and was brought across the border to the U.S. by her parents at the age of 3.  A few years later, her uncle died in the U.S., and her parents wanted to bury him in Mexico.  So they brought Jio to Mexico with them for a few months, and then crossed her back to the U.S.  Surely, no one would want to penalize a young child for being brought unlawfully to the U.S. by her parents.  It wouldn’t make any sense, right?

Fast forward to 2011.  Jio is a senior at one of the Cal State universities.  She is also a Marathoner and an All-American Girl.  Early in her relationship with Ryan Campbell, Jio tells him that she has no papers.   She cannot work because she has no Social Security Card, and cannot drive because she does not have a license.  Some people do both using phony papers, but Jio is a very honest young woman.  Ryan loves her and he wants to marry her. Of course, he also wants to help her get her paperwork in order.  “Jio, don’t worry, we’ll hire someone to do the paperwork”.

They marry, and Jio makes her first ever visit to Los Angeles where she and Ryan hire a notario who was recommended to them.  The notario explains that because Jio did not enter the U.S. with a visa, she will have to go to the U.S. Consulate in Ciudad Juarez, Mexico to apply for a green card.  And she will have to get a waiver too because of her unlawful presence in the U.S.  Jio agrees to do so. She does not want to live in the U.S. without papers.

When the big day arrives, Ryan and Jio fly down to Juarez together.

At her interview which lasts between 5 and 10 minutes, the officer asks Jio if she has ever left the U.S. since she first arrived at the age of 3.  Yes, she replies.  When my uncle died, my parents brought me back to Mexico for a few months.  They buried him in a Catholic ceremony in Mexico City and I attended school in Mexico for a few months before we returned to the U.S.  I must have been around 9 or 10 years old.

The examiner asks her whether she was 9-years-old or 10-years-old when she returned to the U.S. with her parents

Jio can’t remember. This was a long time ago, and she was very young. However, frightened by the examiner’s stern demeanor, she believes that if she fails to answer this question, she may not be returning to the U.S. anytime soon.  “10”, she says, “I’m pretty sure that I was 10.”

This answer immediately sets off a change of events that ends with the examiner denying her application for a green card because of her “unlawful presence” in the U.S.  And what about the waiver that the notario told her to submit?  The examiner states that she will only be able to submit a waiver after she remains outside the U.S. for at least 10 years.  “Next applicant!”

Needless to say, Jio is in a complete state of shock.  She tries to explain to Ryan what happened.  He calls the notario, but the notario does not answer this or any of their subsequent phone calls.

It’s like a bad dream.  Ryan has get to get back to his job in California.  Where will Jio stay in Mexico and for how long?  She calls her aunt in Toluca, near Mexico City, who agrees to put her up.

As soon as Ryan returns to California, he starts calling various immigration attorneys in Northern California.  Could I hire you to bring my wife back to the U.S?  Every single attorney tells him the same thing: The examiner is correct.  She needs to wait outside the U.S. for 10 years before she can submit a waiver.  The bad dream quickly becomes a nightmare.

Meanwhile, in Mexico City, Jio locates an internet cafe and gets busy googling, trying to learn about “unlawful presence bars and waivers”.   She comes across a page on our website which contains numerous government memos explaining how the unlawful bars operate.  There’s a 3-year bar, a 10-year bar, and another bar that does not allow persons to even apply for a waiver until they are outside the U.S. for 10 years.  The last waiver is reserved for serious offenders, persons who are unlawfully present in the U.S. for over a year, leave the country and then re-enter the U.S. without inspection.  But isn’t there an exception for children?  Apparently not.

However, only unlawful presence after the date that the law became effective, on April 1, 1997, counts.  So that’s why the examiner was so curious about whether she was 9 or 10 years when she returned to the U.S.  If she was 9, she could not have accrued one year of unlawful presence, but if she was 10, she could.  But she was scared not to answer, so she guessed.

Jio phones her parents and asks for paperwork relating to her uncle.  His death certificate, his funeral paperwork, the permit for transporting his body from the U.S. to Mexico.  When she receives each of these officials papers, it becomes apparent that she had just turned 9 when each of these events occurred, and that she returned to the U.S. prior to her 10th birthday.  What to do now?

Jio tells me that a couple of weeks after CDJ denied her application she learned, on top of everything else, that she was pregnant.  I advise her that since the government moves slowly, she will have to have the baby in Mexico.  However, based on her husband’s status, the baby will be a U.S. citizen at birth.  And,  in a sentence that only an immigration attorney could shamelessly utter, I advise her that her being pregnant will be a positive factor in demonstrating “extreme hardship” to Ryan.

The rest of the story was told by Jio in her narrative of her 16 months in Mexico.

Suffice to say that on January 5, 2013, Jio’s 25th birthday, she arrives back in the U.S.   I finally get to meet Jio, Ryan and their one-year-old son on Mothers Day.  They are a wonderful family!

I still can’t begin to comprehend how our national interest was served by separating Ryan from Jio and their newborn son for over one year.

But, optimist that I am, I hope that Congress will remedy this situation for couples in the future so that what happened to Ryan and Jio Campbell never happens to anyone else. Members of Congress, whatever else you do this year, please stop punishing children for what their parents did. It’s not their fault!