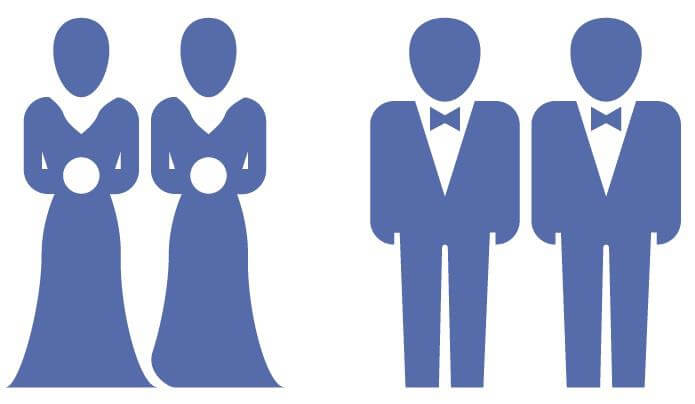 On June 26, 2015, the U.S. Supreme Court struck down all state bans on same-sex marriage, legalized it in all fifty states, and required states to honor out-of-state same-sex marriage licenses in the case Obergefell v. Hodges.

The Supreme Court struck down section three of the Defense of Marriage Act (DOMA), which denied federal benefits to couples in same-sex marriages. The federal court is now blocked from denying same-sex couples any benefits that different-sex couples receive. This means that U.S. citizens and legal permanent residents can sponsor their same-sex partners for green cards and that same-sex spouses can also be included as derivatives in their partners’ family and employment-based green card applications. The striking down of DOMA also makes it easier for immigrants to join their spouses in the U.S. in most nonimmigrant visas categories.

Since immigration is a federal law, as long as a same-sex couple is married in a state that permits gay marriage (California, Connecticut, Delaware, Iowa, Maine, Maryland, Massachusetts, Minnesota, New Hampshire, New York, Rhode Island, Vermont, Washington, and Washington DC), their marriage is valid for immigration purposes and the couple may live in whichever state they choose.

Immigrants in same-sex relationships who reside outside of the U.S. also benefit from DOMA’s downfall. Couples may choose to get married in any of the 17 countries that allow same-sex marriage – Argentina, Belgium, Brazil, Canada, Denmark, France, Iceland, Luxembourg, the Netherlands, New Zealand, Norway, Portugal, South Africa, Spain, Sweden, the United Kingdom, Uruguay, and even in some states in Mexico. The foreign partner can now also obtain a fiancé visa and come to the U.S. to get married in one of the above 14 states as long as they show that their relationship is bona fide and that they plan to get married to their partner within 90 days of arriving in the United States.

Below, we link to general information regarding the overturning of DOMA and insightful news stories explaining the changes that will be implemented to the immigration process as a result of the Supreme Court’s decision.

“I had the best experience working with Law Offices of Carl Shusterman. The staff is very professional, trustworthy, responsive, knowledgeable and helpful.”

This page is broken into the following subsections: