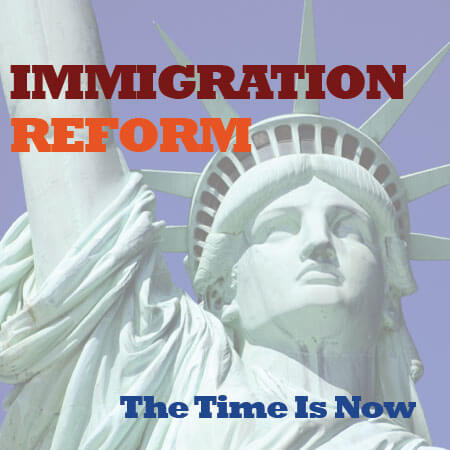 This video was filmed at the event and features Congresswoman Grace Napolitano who sponsored a private bill in the House of Representatives for our clients, Mr. and Mrs. Jay Desai. Also speaking is Suhang Desai, their 22-year-old son, an honor student at UC Riverside.

Mr. Desai entered the U.S. legally from India in 1981 and applied for amnesty under a 1986 law signed by then-President Ronald Reagan. He was issued a work permit which he renewed annually, was employed as a travel agent, paid his taxes, married an Indian woman born in England, and raised two sons, Suhang and Sagar, born of whom are U.S. citizens. Ultimately, however, his application for amnesty was rejected.

Not wanting to remain in the U.S. unlawfully, Mr. Desai and his wife applied for cancellation of removal before an Immigration Judge. An INS Attorney appeared before the Judge on a number of occasions over a period of many years, and received numerous postponements of the hearing. At the beginning of the case, their two sons were 12 and 11 years of age. However, by the time that the actual hearing occurred, the sons were university students aged 18 and 19. This is significant because the primary basis of the Desais’ application was that their son Sagar was afflicted with a incurable condition called pre-cancerous ulceritive colitis and would suffer “extraordinary and extreme unusual” hardship if his parents were deported since he was completely dependent on his father’s health insurance to pay for his treatments and medications.

However, by the time that the hearing actually occurred, the Judge ruled that both sons were old enough that they were not longer dependent on their parents. He further ruled that Sagar did not need his father’s health insurance since he could apply for welfare. Futher, the Judge ruled that the hardship would be lessened since the parents could visit their sons in the United States. This was untrue since both parents would be subject to a 10-year bar to reentering the U.S.

On appeal, the Board of Immigration Appeals overturned each of the Judge’s factual findings, but inexplicably affirmed the Judge’s decision that the parents must leave the U.S.

The next step was Federal Court. By this time, Sagar had turned 21 years old, and submitted petitions to sponsor his father and his mother, both of which were approved by the Immigration Service. All that needed to be done was for the ICE prosecutor to agree to a Joint Motion to Reopen the case so that the Immigration Judge could rule on the green card applications for the parents. This the prosecutor refused to do. The Federal Court Mediator attempted in vain to convince the government that this would be the fair and humane way to resolve this matter, but to no avail.

Finally, the Federal Court ruled that because of a law passed in 1996, they lacked the jurisdiction to review the decision of the Board of Immigration Appeals.

Fearing that the parents would be deported, and that the sons would be forced to drop of school, and that Sagar would lose his health insurance, we appealed to Congresswoman Napolitano for assistance.

She introduced a private bill in the House of Representitives (H.R. 733) of behalf of Mr. and Mrs. Desai. For the moment, the case in on hold.

At this point, the passage of Comprehensive Immigration Reform is the Desais’ last hope to keep their family together.