Signing an Affidavit of Support 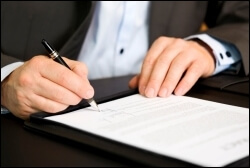 Are you about to sign an Affidavit of Support for an immigrant?

After signing an Affidavit of Support, your responsibility to financially support the immigrant lasts until the he/she:

In order to be eligible to sponsor an immigrant for a green card, a person must be able to satisfy the required income levels. The sponsor must show that they have enough income and/or assets to maintain the intending immigrant and the rest of their household at 125% of the current Federal Poverty Guidelines. If your income does not meet the level, additional sponsors will have to be found and also sign an Affidavit of Support as a joint sponsor. In addition to the income requirements, you must be either a US citizen or a permanent resident, over the age of 18, and reside in the US.

It is important for your to have full faith of the immigrant’s intentions before signing an Affidavit of Support. In the worst case scenario, the immigrant could quit his job, go on welfare and sue you for support.

Both your income and assets may be considered to be available to the immigrant in order to determine their eligibility for certain Federal and State means-tested public benefits. The immigrant may be ineligible for those benefits making you responsible for repaying the cost of any received benefits to the agency that provided them. If the debt is not repaid, the government can sue you and collect enough money to reimburse any public agencies that have given benefits to the immigrant.

Once you sign and submit an Affidavit of Support, you are legally responsible for financially supporting the immigrant should he receive means-tested public benefits. You must comply with USCIS rules which include reporting any change of address within 30 days and facing noncompliance fines if you attempt to escape their financial obligation.

Therefore, it is important for you to consult an experienced immigration attorney before signing an Affidavit of Support.

Signing an Affidavit of Support Links