Private Romero Becomes a US Citizen 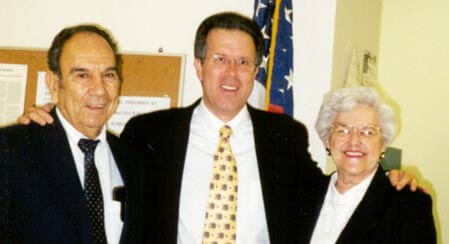 After his discharge from the US Army in 1951, and his forced return to Mexico, it took Private Romero almost a half century to achieve his dream to become a citizen of the United States. Why was that?

His 13 older siblings were born in the US where his parents resided as lawful permanent residents, and later as US citizens. However, before Arthur was born, in 1922, his mother decided to have her baby in Mexico, the land of her birth.

Because his father had been subject to severe discrimination in the US, when teenaged Arthur received a “1-A” draft classification during World War II, his father ordered the boy to live in Mexico rather than be drafted. Little did Arthur realize that by obeying his father, he gave up his right to return to the US.

Although Arthur tried to make amends by enlisting in the US Army during the Korean War, and serving honorably for three years, the INS ordered Private Romero out of the country in 1951. For the next half century, despite his wartime military service, his US citizen wife and his three US citizen sons, he was turned down for a green card three times, and for citizenship in 1971. Nevertheless, Mr. Romero continued to work, pay taxes, and send all three of his sons to college. Since his retirement, fearing deportation, he has never collected a single Social Security check nor obtained benefits from either the Veterans Administration or from Medicare.

In 1998, his son Ray used Attorney Carl Shusterman’s web site to discover a Federal Court decision which he believed would help his father become a US citizen. He contacted Shusterman who prepared an a naturalization application for Mr. Romero.

With the assistance of Congressman Calvin Dooley (D-CA), an interview was arranged for Mr. Romero at the INS office in Fresno, California in late September 2000. Mr. Romero passed his examination with flying colors. On October 16, 2000, at the age of 78, his achieved his dream. 50 years after serving in the US Army during wartime, Private Romero was sworn-in as a citizen of the United States.