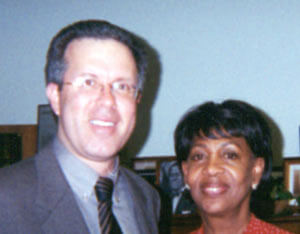 On March 22, 2001, Carl Shusterman met with Representative Maxine Waters (D-CA) in her Washington, DC office. Representative Waters is a member of the House Judiciary Committee.

Congresswoman Maxine Waters represents a district which is increasingly Hispanic. It has become a common occurence for the Congresswoman to encounter young constituents who have recently graduated from college and can not find employment because they lack lawful immigration status in the U.S. Many of these college graduates were brought to the U.S. by their parents when they were very young, and never gave a thought to their immigration status until they graduated and sought employment.

Representative Waters asked her staff to recommend an immigration attorney who she could talk with about crafting legislation to allow these college graduates to legalize their immigration status. A staffer who is a regular reader of SHUSTERMAN’S IMMIGRATION UPDATE recommended that she meet with Carl Shusterman.

As a result of her meeting with Attorney Shusterman, Representative Waters planned to introduce legislation which would allow these graduates to obtain H-1B status upon being offered a professional job.

Fortunately, in 2012, President Obama’s Deferred Action for Childhood Arrivals (DACA) succeeded in allowing over 800,000 undocumented youths, many of them college graduates, to obtain work permits in the US.